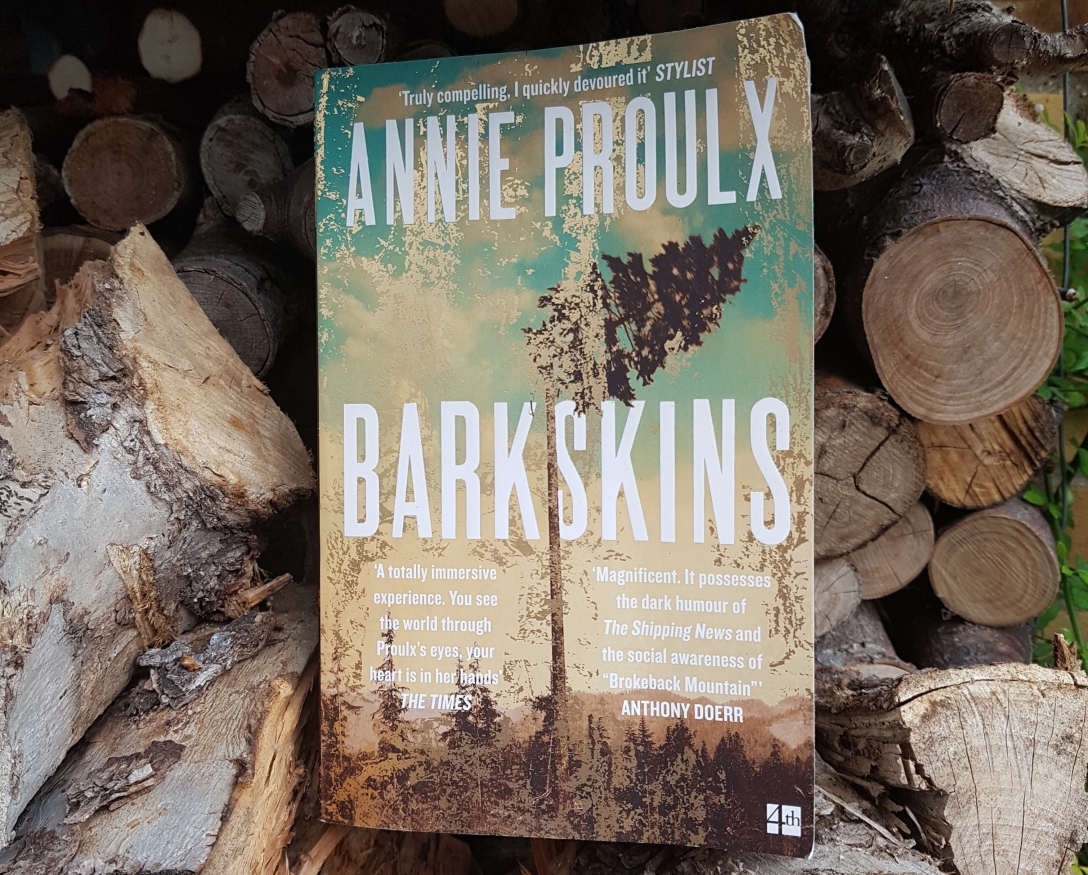 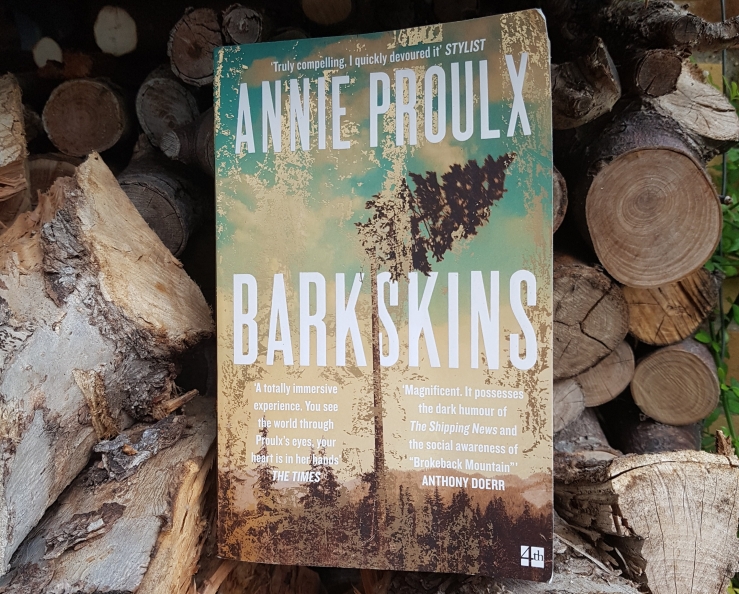 One of my favourite books of all time is The Shipping News, I have read this over and over, it never fails to pop something new out at me. So I tend to leap on an Annie Proulx when I see one, though I admit the sheer physical size of Barkskins meant I left it sitting on my shelf for a long time. Summer holidays – and with them  more reading time –  seemed a good time to take the plunge into the vast forests of  America. This is a big book, but once I’d started I was so borne along on the narrative – driving  its way through the books as settlers drove across America – that it felt like reading much less than the 700+ pages it takes up.

The novel tells the story of two families – the Sels and Dukes – who’s ancestors made their way to North America as poor woodsmen – or Barkskins – to clear the forests of North America in the late 18th Century. Charles Duquet and Renee Sel are thrown together on a ship, they are escaping the poverty of late 18th century Paris. They end up on the property of Monsieur Trépagny as indentured servants, working off their debt until they get land of their own. Charles is cast off into the forest pretty early on; we think he can’t possibly survive, but he does. Renee marries Mari,  the native (Miq’maw) woman who lived with Trépagny, carries on his logging work, and he and Mari have a family. Charles Duquet’s life takes an entirely different turn, and he too creates a dynasty, changing the family name to Duke. We follow the descendants stories through three centuries, and what stories they are!

The narrative ranges from America and Canada to France, the Netherlands, China, New Zealand and Brazil. All this travel is driven by the need (and greed) for timber. We’ve maybe forgotten what a tree based economy the world had until relatively recently. Timber was key to so much – and you could become rich off it, or not.  In the drive for new timber resources  in America the native Mi’kmaw are driven off their lands by European settlers who come up against little resistance. Mi’kmaw become loggers themselves, they must earn ‘white man money’ in order to survive. It is one of the most affecting themes of this novel; a gradual grinding down of a whole culture, until the native way of life – like the forest –  is pretty much gone. Not only are the loggers there to make money, they believe the wilderness should be tamed; they don’t, or can’t, understand how the ‘savages’ live in harmony with the forest.

Proulx kills her characters off frequently, and often (like them) you don’t see it coming. She really brings out the sense that life can be short, that it can be dangerous and hard, and that no-one escapes death – rich or poor, settler or native. Some of the deaths happened so suddenly I gasped. I had invested in a character’s future (a future I would enjoy reading, I imagined,  in the next 250 pages) only to have them taken – often violently – away from me. Native peoples, villages and culture are wiped out,  fortunes are made and lost, families grow and are estranged from each other. All the time the trees are falling, nothing will ever be the same again. Imagine this being your real life experience, the author seems to challenge – you can’t rely on anything.

Apart from German forest manager Dieter Breitsprecher – who in the late 1800s marries into the wealthy Duke family and their diverse timber business – and believes in replanting trees for the future, none of the European descended characters in this novel give a moments pause to the idea that there will one day be no trees to fell.  The forest goes on for miles, they will simply buy more land to cut in Chicago, Michigan, and on and on. In the final chapters, by the late 20th century, and in a brilliant piece of writerly magic bringing the Dukes and Sels back together, ecologist Sapatisia Sel and her cousins Jeanne and Felix begin to replant the forest thorough a programme financed by the Breitsprecher Foundation.

I really can’t do this book justice here –  I found it was good to find some quiet hours, and read large chunks at a time, or I’d lose my way. I’d have loved some maps (but I got my atlas out and had a good look at New England and all the other places this story roams to, which was fun!). There are Sel and Duke family trees are provided so you can keep track of who’s related to who, which I very much appreciated.

Affiliate Links: If you buy books linked to my site, I may earn a commission from Bookshop.org, whose fees support independent bookshops.

Just emptied the kiln (it took a looooong time to cool down due to it being a hot as hell here). Next thing is to take thier photos and get them into my Folksy Shop. Though these aren't there yet, there are others things in there for you to buy* if you feel a piece of handmade pottery will help cool you down** in this ridiculous weather***
A glorious summer day at Charmouth....hmm...
Loading Comments...
%d bloggers like this: