I am of an age where the current TV adaptation of Poldark is my second. I saw the first curled up on the scratchy old wing back green sofa next to my Mum, who was usually knitting something with squeaky acrylic ‘wool’, I can remember the click of the needles and the occasional bump of elbow as she turned the work.  I was probably a bit young to be watching of course, though my  interest was in the lovely frocks and coats rather  than the politics (sexual and otherwise) and mining economy of late 18th Century Cornwall.

My Mum was quite keen on Ross I’m sure, and  I loved Demelza (obviously). My Dad would occasionally peer around the edge of his book and sigh in a despairing manner, in much the same way husbands up and down the land are doing of a Sunday night all over again, I expect, as they look up from the Twitter feed on their iPads and mobile phones.

I saw the 70s Poldarks all over again while on maternity leave, thanks to UK TV Yesterday or whatever it’s called, and only then noticed the stagey sets and occasionally fluffed line.  But, the frocks and coats were just as good – if a bit 1970s looking – and the story excellent, so when I heard about the new adaptation I thought, well, why don’t I read all the books? (my Mum is also a great reader, I remember her reading these,  we have more in common than I imagine).

Winston Graham wrote twelve ‘Novels of Cornwall‘, as they are all subtitled, between 1945 and 2002. They follow the fortunes of the  Poldark (and Warleggan) families through the tumultuous times of  late 18th and early 19th Century in Cornwall and elsewhere, but mainly Cornwall.

The love story, rivalries and so on the characters live through are brilliantly written, I became as properly sucked in to their world as you should, when you’re reading. The ‘supporting cast’ are fleshed out a bit more in the books, because there are pages and pages to do so. The Paynters are properly hilarious, Aunt Agatha a really quite horrible old lady. We hear a lot more about the villagers and miners, and Ross’s unusually (for the time) equal relationships with them, as far as running the mine and looking out for them goes. However, I won’t say what happens as the current TV show is still on book 2/3 (you can spoiler yourself quite easily on your own, if you can view it as such with a story that’s been knocking about for 70 years!).

If you’re into the popular historical novel there’s a lot in them to entertain and inform;  Tin mining methods and economy, the industrial revolution (Trevithick makes an appearance), social history,  the dreadful position of women in this society (so many trapped in awful, awful marriages). Graham even takes us to France during the Napoleonic Wars and the French Revolution. He covered all this history via his characters, it never seems crowbarred in and there are no huge passages of historical background.  This I think is what makes the whole tale so compelling – some historical novels don’t carry this off at all (and I have just given up on one because of it) but the good ones, like these, do it brilliantly.

The novels are, of course, a different experience to watching the TV shows, though the adaptations are both very good. For one thing Demelza has dark hair (I know, it’s supposed to be red surely, what was he thinking!) and Elizabeth is blonde. Ross isn’t quite as nice a bloke as the one being played by Aiden Turner – there is a very troubling scene in Warleggan, for example, involving our hero. George, don’t worry,  is as dastardly as you’d expect, but even then you find yourself with some sympathy for him. 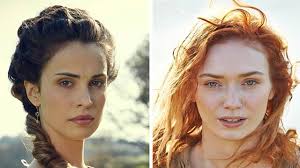 I loved these books more than I expected to – I read all twelve in a Poldark marathon, with nothing slipping in in-between. Full immersion, if you like. The earlier ones I feel are better than the later ones, but once I was going I didn’t stop. I even got the full nostalgia effect by reading some as tatty second (possibly fifth) hand Fontana paperbacks which had clearly spent some time in a barn – the pigeon feathers were a giveaway, thanks abebooks.co.uk!

Old Books (possibly in a barn, who knows)

You, however, can get them in sparkly new editions with the delightful faces of Aidan Turner et. al. on the front. Or on your Kindle or similar, as I did after the pigeon feather incident:

I would thoroughly recommend reading these books if they are Your Kind of Thing. It’s up to you if you want to get ahead of the game TV show wise, I couldn’t stop once I’d started. Reading to the end hasn’t harmed my enjoyment of the TV series at all, but then I do naughtily enjoy being the annoying person on the sofa going “well THAT’S not how it happened in the novel…”

By the way, there’s a lovely 15 minutes available (at time of writing) on Radio 4Extra in which Winston Graham imagines meeting Demelza and having a little chat , which was written shortly before his death in 2003.

Also by the way,  part 2: I have just found out via IMDb that Stefan Gates, of Gastronaut and bug eating fame, played Geoffrey Charles Poldark (a small boy) in the first adaptation – isn’t the internet an amazing resource!].

I just spent two hours making my website more *Ceramics Facing* so my customers and potential customers might find it easier to find thier way around! Like a spring clean, but in autumn (which is when my cleaning and decluttering vibe always kicks in).
*cackles spookily*
I'm absolutely here for autumn stuff! It seems to be cooling down again after that warm weekend we just had, so it must be time to cosy down into my favourite season. The house is full of conkers, pine-cones and candles 🤎🍂
Here, have a lump of clay! Magical things will happen...probably.
Loading Comments...
%d bloggers like this: