The swatch is finished. But first a bit of background to the parts of the design not yet seen (until now…fanfare?).

Stonehenge stands in a landscape – often referred to as a sacred landscape –  of monuments. It is part of the UNESCO World Heritage Site covering Avebury, the Stonehenge Cursus, Silbury Hill and barrows such as West Kennet Longbarrow and Bush Barrow. I have spent quite a lot of time in the area – Avebury is a favourite day out; where else can you buy a pint in the middle of a stone circle, or spook yourself with memories of scary 1970s childrens programmes?

In my student days we had a trip out to Salisbury Plain, taking in Stonehenge very early one summer morning. We were able to walk ‘inside’ the monument. Walking between the stones themselves is an entirely different experience to the one you have as a general visitor (though the experience is vastly improved by the new visiting arrangements you are still kept outside the stones, unless you visit at Midsummer for the festivities).

The monument suddenly seems less huge, but at the same time more imposing. The stones tower above you and you feel small, you begin to understand how a hierarchy of ‘priests’ and ‘congregation’ might work around a space like this. The monument is not a thing to look at, it is a thing you experience, and you would probably experience it differently according to your place in society.

Despite all the reading, essay writing and exam sitting it wasn’t until I stood among the stones that I fully realised all these monuments meant nothing without the people; the generations who built them, who maintained them, who forgot them and then came back to them. People have written this place into novels, films, and into their own lives. To the modern day druids, new agers, travellers, archaeologists and historians, tourists, writers, this ancient monument is still hugely significant.

That’s why I’ve put people – druids (of course)  and a circle dance of visitors – into the middle of this piece of work.

A Circle Dance of revellers/visitors/whatever you wish them to be: 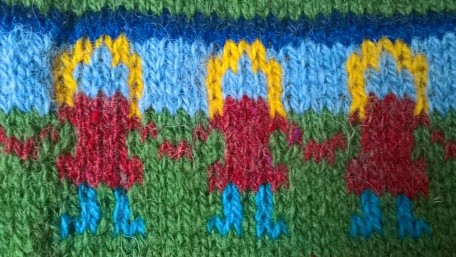 In knitting this second swatch I’ve changed the order in which the elements of my design appear in the blanket, and smartened up the Trilithon section:

Here is the entire swatch:

The design will be mirrored on the other half of the blanket, and then I’ll add a trim of some kind.

I’m really excited about getting going on the actual piece itself.

Previous posts about this project:

Where all this came from…:

During my degree I became quite fascinated by the different understandings and experiences of ‘significant’ places by people through the ages.  I wrote my undergraduate dissertation on that very subject – I did love a bit of archaeological theory, I wasn’t just in it for the digging (though that is obviously Great Fun).

I was influenced by the work of Barbara Bender and Richard Bradley on this subject. Bender’s book ‘Stonehenge – Making Space’  I remember really annoying some people (often the sign of a good read!) and I devoured Bradley’s  The Significance of Monuments  – I’m looking at that  well thumbed and margin-noted copy just now – as well as his  The Past in Prehistoric Societies.