I’ve been thinking about designing a lap blanket for ages, ever since I finished Kate Davies’ ‘Rams and Yowes’ which I made in a multi-coloured stash busting mood back in 2012 . I had an idea that I’d like to do some thing based on a landscape I know well, I also had a vague idea about how I would do it. This is part one because it turned out, as I started the actual knitting, a load of ideas flooded into my head about what I would create in the middle part of this blanket. Anyway, here we go.

I did an archaeology degree as a mature student and became fascinated by later prehistory in the British isles.  That stage in human history when people stopped hunter-gathering, and began to settle down in farming communities. People began to have a much greater impact on their environment – much of which we can still see today in the remains of their settlements, field systems and material culture. They began to develop belief systems that resulted in the building of monuments to the ancestors (Neolithic long barrows like West and East Kennet and Waylands Smithy) and, in the Bronze Age, mounds containing  elaborate burials (Bush Barrow, Upton Lovell ‘Golden’ Barrow).

People also erected standing stones and stone circles from the far north to the south of the British Isles. These circles have been interpreted ceremonial centres and meeting places for as long as archaeology has existed as a discipline, and before.  Among the well known monuments; Callanish, the Ring of Brodgar, Arbor Low, Stanton Drew and Avebury perhaps the most famous of all is Stonehenge.

However, I am not here to write an archaeology essay (you can find millions elsewhere, or I can lend you one of my old ones) I’m here to write about this colourwork design which has been festering in my head for three years.

Stonehenge is just off the A303 near Amesbury – it’s a road we use often, a slower and (traffic jams permitting) more pleasant route to the South West than the M5. I always feel a  little thrill of excitement as we get to the turn after which the monument ‘pops up’ as if from nowhere. There’s the Henge, on the plain, in splendid isolation – more so since the relocation of the Visitors’ Centre and car park from directly over the road to its new home near Winterbourne Stoke.

After knitting a few colourwork patterns, and in many of them substituting my own colour scheme, I’d bought Felicity Ford’s (@knitsonik) book on making your own stranded colourwork patterns. I dabbled about with some designs and put them away for a year.  Then a couple of weeks ago I heard her interview with Kate on the ‘A Playful Day’ podcast. That inspiring  interview was the thing that finally kicked me off, and I started colouring in an excel spreadsheet.

Though I started with coloured pencils and paper,  I found doing the final parts of this easier on a spreadsheet – I can move things around and paste pattern repeats in – and find out really how bad my counting is. I can also zoom all the way out to get an idea of what the design will look like overall.

The design I’ve come up with, after staring at that spreadsheet for A Very long Time, contains all the elements I wanted it to (apart from the singing of a downland skylark).

A Trilithon: Probably the most recognisable part of the henge, from the Bronze Age phase:

The A303: The road, the course it takes and the affect it – and the resulting traffic – has on the stones is an ongoing debate. 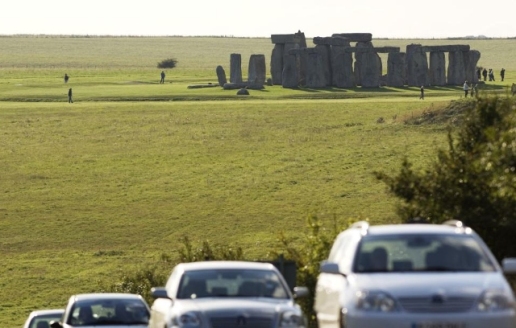 Barrows: Specifically Bush Barrow, pictured below, which was excavated in 1808…

…n which the following remarkable objects were found:

Function: Of course we will never really know the function of the place, but there are many theories, the most popular being that Stonehenge is a temple to the sun – hence the gatherings at midsummer. Though recent work suggests it may have had a function at midwinter. So, I though I would include the sun and the moon:

I now have a chart (part 1) and some knitting – Jamieson & Smith Jumper Weight from Shetland, though it would be lovely to do this in a more local yarn, I don’t think there is any with such a vast range of colours:

Stonehenge: there is vast literature (of all ilks) about this place you can Google, or similar. But here is the English Heritage website as it has a rather fab timeline:

Podcast Episode 95 is the one mentioned here, they are all marvellous.

🌸 Oh how I fantasise about ye olde cottagey windows with tiny leaded panes and deep oaken windowsills to display the annual sweet pea harvest against. I would have harvested them in the early morning, while drifting round the garden in a long frock and linen apron, whicker basket in hand, vintage snippers to cut the stems...
🐦 A little folksy bird.
I have been stocking up my shop and doing the catalogue thing to link it to HERE so you can find things HERE and go directly THERE. By the time I've done two items I usually have to sit down, breathe deeply and have a mug of tea 😄.
🚶‍♀️I almost didn't go out but realised I was pacing the house like a caged animal so had some words with myself. Something like "the shortest walk will do you the world of GOOD". Almost 10km later I got back home, so decided it counts as a "Friday Walking Club" solo event 🤣 (it's not a real club, more of a loose affiliation)
Loading Comments...
%d bloggers like this: