A lunchtime browse of Ravelry (I know, dangerous stuff!) led to me stumbling on the ‘maud‘ thread in the Kate Davies group. I don’t remember reading about it on her blog but I suppose I would have done, only at a point when I was less interested in sewing than I am now. She wrote one of her marvellous essays about  the ‘maud‘ (I like the tasselly one in particular, so I may have to make two) and later published details of how to make one for yourself .

I had a lot of material given to me a while ago, amongst it was a pretty long length of tweedy stuff with a blue/yellow colourway, and some smashing (possibly Liberty) prints, so I chose this blue/green for the lining: 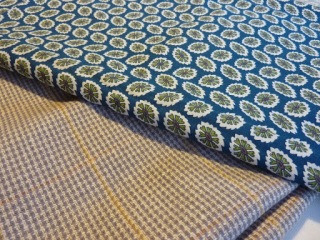 I cut the pieces on Thursday afternoon and sewed them into the L shapes using my trusty ancient Bernina (it goes back at least to 1982,  my Mum got it for me from my old school  when Thatcher decided no-one needed to learn how to cook or sew any more…but that’s a whole other rant!) on Thursday evening:

I did all the pressing as directed (pressing makes such a difference, like blocking, of which I was ignorant for so many years…):

and sewed round again:

Until I finally had a finished ‘maud’ – here it is, wrapped around a chair…

…because by now I had the un-commonest common cold known to humankind, and there was no way I was going to self-photograph. So I nested myself on the sofa, wrapped in my lovely new maud, knit a sock and watched ‘Argo‘ until school pick up time.

It is very warm, but tends to slip off my shoulders a bit (all coats and wraps do this on me) so I shall need to get kilt pins if I want to ‘go about looking like a Victorian re-enactor’ (and I will, I’m a morris dancer – I’ll never look stranger than I do when doing that!)

🌸 Oh how I fantasise about ye olde cottagey windows with tiny leaded panes and deep oaken windowsills to display the annual sweet pea harvest against. I would have harvested them in the early morning, while drifting round the garden in a long frock and linen apron, whicker basket in hand, vintage snippers to cut the stems...
🐦 A little folksy bird.
I have been stocking up my shop and doing the catalogue thing to link it to HERE so you can find things HERE and go directly THERE. By the time I've done two items I usually have to sit down, breathe deeply and have a mug of tea 😄.
🚶‍♀️I almost didn't go out but realised I was pacing the house like a caged animal so had some words with myself. Something like "the shortest walk will do you the world of GOOD". Almost 10km later I got back home, so decided it counts as a "Friday Walking Club" solo event 🤣 (it's not a real club, more of a loose affiliation)
%d bloggers like this: